Night Safari’s Sloth Bear twins Shreya and Zara at about five months exploring their exhibit. Born in September 2018, the cubs were hand-raised by vets and keepers to maximise their chances of survival. Now that they have grown strong and independent, keepers are conditioning them to the exhibit for their eventual public debut. Jurong Bird Park saw the first Santa Cruz Ground-dove chick hatch on 31 December 2018, marking the park as the world’s first zoological institution to breed the species under human care. There have been 12 hatchlings since then and more eggs being incubated, a significant win for a species likely with a wild population of barely over 300. Jurong Bird Park currently houses the only assurance colony for this endangered species outside its native Solomon Islands.

Our feathered friends show no signs of stopping. With the first Straw-headed Bulbul hatched in 2017, Jurong Bird Park welcomed three more into the fray in 2018. The park is the first in over a decade to breed these critically endangered species under human care. It is believed to be extinct in half of its native range in South East Asia due to extensive poaching for the songbird trade and Singapore is the last stronghold of this species, with a local wild population of just over 200.

Taking care of wild baby animals is no small feat and requires specialised and dedicated care, as the human carers of Night Safari’s Sloth Bear cub twins can attest. Born mid-September 2018 to an inexperienced mother, the animal care team made the decision to hand-raise them to maximise their chances of survival.

Unable to move on their own and with their eyes closed, the cubs required round-the-clock care in the animal hospital during their first delicate weeks. Now at about five months old, they reside behind-the-scenes in Night Safari’s Sloth Bear exhibit, specially furnished with branches for climbing and toys for enrichment. Sloth bears are native to India and the female cubs have been given fitting names of Indian origin – Shreya meaning ‘beautiful’ and Zara meaning ‘princess’. As the pair has grown into spritely young bears, keepers are weaning them off human interaction by reducing the amount of direct physical contact and getting them used to the Sloth Bear exhibit for their eventual public debut.

Over at River Safari, a baby Giant Anteater was born in March 2018. She was named Leona after La Leona, a river in Argentina. Leona is the first giant anteater to be born here in four years, and the eighth Giant Anteater baby to be born in WRS.

Singapore Zoo’s herpetology team saw great success in breeding its amphibians. Particularly worthy additions were five Malayan Horned Frogs that metamorphosed successfully in October 2018. This was the first time the tadpoles of the Malayan Horned Frog—a species notoriously difficult to breed—reached froglet stage in Singapore Zoo. The tadpoles and froglets are especially sensitive and require precise environmental conditions to thrive. Carers monitor their growth meticulously while closely maintaining the temperature, humidity and ventilation of their microhabitat to optimise their chance of survival.

Singapore Zoo’s primates were no slouches either. The park welcomed a baby female Chimpanzee named Nini in January 2018, bringing the total births of the endangered species to an impressive track record of 32. Now at little over a year old, Nini spends most of her time clinging onto 39-year-old mother Bianca’s back and will do so for at least another year. The cheeky chimp is starting to exercise her independence by exploring her surroundings and playing with the rest of the troop, but always under the watchful eye of her mother.

March 2018 brought Singapore Zoo’s 25th Celebes Crested Macaque baby and first birth in seven years. Named Agung, which means ‘great’ in Bahasa Indonesia, the young and energetic one can be found darting about on his island home in Singapore Zoo’s Primate Kingdom. The Celebes Crested Macaque is native to the Indonesian island of Sulawesi and its neighbouring islands. Unfortunately, it is also critically endangered and threatened in its native range by habitat loss and hunting for bush meat, where populations have declined by 80 per cent in the last 40 years. Besides breeding, Wildlife Reserves Singapore supports Selamatkan Yaki, an Indonesian-based conservation project on outreach and field projects to save the iconic species in its natural habitat.

“The goals of breeding wildlife in our parks are to achieve sustainable populations of species in human care. Depending on species and circumstances, these animals can be ambassadors for community engagement and education, and they may also serve as assurance colonies to safeguard against extinction in the wild. The ultimate goal would be to return some of these zoo-born progenies to their wild habitats someday, when it is safe to do so,” said Dr Cheng.

* IUCN – International Union for the Conservation of Nature Singapore Zoo’s 32nd Chimpanzee baby, Nini, was born to 39-year-old mother Bianca in January 2018. The now one-year-old is independent enough to start exploring and playing with the other members of the troop, but she still spends most of her time clinging onto her mother’s back. A Celebes Crested Macaque was born in Singapore Zoo on March 2018, a first for the park in seven years. The birth is a welcome addition for the critically endangered species under threat in its home range by habitat loss and hunting. One of the Sloth Bear twins at five months old exploring Night Safari’s Sloth Bear exhibit. Now that the bears have grown, keepers are weaning them off human interaction by reducing the amount of physical contact with the bears. River Safari’s Leona the baby Giant Anteater at three weeks old. Giant anteater babies spend most of their first year hitched on their mother’s backs for protection against predators in the wild. A Malayan Horned Frog tadpole. Keepers had to be especially meticulous in caring for them as the tadpoles and froglets require the optimum environmental conditions 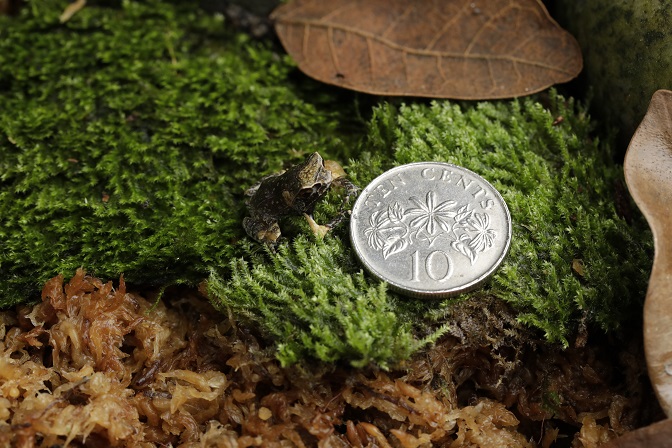 A  recently metamorphosed  Malayan Horned Froglet. Keepers had to be especially meticulous in caring for them as the tadpoles and froglets require the optimum environmental conditions. The first Santa Cruz Ground-dove successfully bred under human care hatched in Jurong Bird Park on 31 December 2018, establishing the park as the first zoological institution to breed the species under human care. A Straw-Headed Bulbul chick in Jurong Bird Park’s Breeding and Research Centre. With the first hatching in 2017 and three more in 2018, Jurong Bird Park became the first in over a decade to breed these songbirds under human care.