Going beyond 220m in some parts, the Congo River is the world’s deepest river. It rages through violent rapids and makes multiple drops to form magnificent waterfalls. But below its troubled surface lies a hidden world of serene beauty - this exhibit has some of the most colourful fish you’ve seen.
Share on

What makes it unique This exhibit features the world’s longest and second deepest freshwater lake: Lake Tanganyika. Africa’s oldest lake, it was formed millions of years ago by the same tectonic plate movements that created the Great Rift Valley. Home to hundreds of species found nowhere else, it is also one of the most biodiverse freshwater ecosystems.

This largest of Africa’s freshwater reservoirs feeds into the Congo Basin, providing food, water and income for the people living nearby. However, climate warming has reduced fish production, a phenomenon that is being seen in other tropical lakes too. Creatures of the Congo

This exhibit is a playground for shimmering schools of Congo tetras.

Also look out for the distinctive broad snout of the African dwarf crocodile, the world’s smallest crocodilian species. It’s usually relaxing at the far right corner of the exhibit. See if you can spot it! 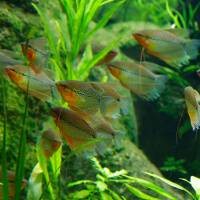