Reintroducing the black-winged myna to its former, safer habitat

How does a rare bird with a striking, melodious song make the world pay attention to its distress call?

The black-winged myna was once widespread throughout the island of Java, Indonesia. Its numbers, however, have been decimated by the illegal bird trade. Listed critically endangered by the International Union for Conservation of Nature, the current population of black-winged mynas in the wild is so small, it would be practically impossible for them to bounce back without help.

Giving these birds a voice and a fighting chance The Cikananga Conservation Breeding Center (CCBC) aims to breed the black-winged myna in captivity and eventually reintroduce the birds to available safe habitats in areas familiar to them. This will help establish new viable populations for this species in the wild and save it from extinction.The newly released birds will then be monitored and tracked.

To encourage breeding during the mating season, the birds will also be given artificial nesting sites. Because humans have coveted these birds as pets, CCBC has also engaged with the community in education and conservation efforts to discourage poaching.

Providing assistance for the programme to take flight 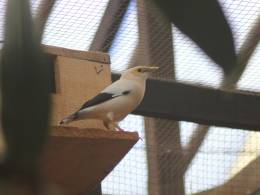 Wildlife Reserves Singapore (WRS) has played an active role in the breeding of the black-winged myna, with two of the three subspecies in our conservation collection.

On the ground, WRS has provided financial support for the post-release monitoring of the birds. This is crucial as some of the black-winged mynas have been known to disappear after their release, because poachers break into the sanctuaries to steal the birds, which continue to be in high demand. We have also reinforced the housing area to secure newly captured birds before they are sent to the breeding centre.

Extending our efforts beyond the black-winged myna, we co-organised the second Asian Songbird Trade Crisis Summit in February 2017, facilitating dialogue amongst 60 experts from around the world to discuss future actions ranging from advocating the closure of illegal markets, motivating enforcement actions, breeding highly threatened species in captivity for eventual release in the wild, and the need for further research to monitor the trade and current wild populations. We also discussed opportunities to raise global awareness of this crisis through campaigns by zoos, and emphasised the role of governments in Southeast Asia in protecting songbirds from unsustainable over-exploitation as well as shutting down pet shops and markets facilitating illegal trade.

Giving this rare species a chance to soar With continued support from WRS, a release site was established and three mature birds were re-introduced to the wild. As a result, four black-winged myna chicks have since hatched. In June 2015, five more adult birds were released at the site, bringing the total population there to 12.

Ongoing outreach efforts to build a sense of pride in the local community have also had an impact. In one simple yet telling incident, a child belonging to a community near Cikananga reported a man carrying a myna (or mynas) on his bicycle.

As children in the community begin to recognise these endangered birds and see the value in protecting them, there is a greater chance of the black-winged myna surviving and thriving once again in the wild.